I love finding new places for food. Whether it be an after work nibble, a special occasion or just something to cheer me up. I’ve found that as my blog continues to develop, a lot more people are coming to me for recommendations of where to eat for certain occasions and I love to be able to give them a reply with somewhere they may not have heard of before. Pho & Bun is definitely going to be one of my new recommendations, the food was great, as was the service and atmosphere, it’s one of those restaurants that you’d be so happy you stumbled across. AND it’s such good prices too, just make sure you wear something with a little extra room as we nearly had to roll home after our 5 course tasting menu!

Pho & Bun is a rather small Vietnamese restaurant located pretty much as central in London as you can get, on Shaftesbury Avenue, just behind Chinatown and down the road from Piccadilly and Leicester Square. Which makes it the perfect pre-theatre eatery, or somewhere to refuel after a long day of sightseeing. They offer a wide range of delicious traditional Vietnamese dishes such as pho noodle soups, curries and steamed buns which are enough to make you want to get on a plane straight to Vietnam immediately.
‘Pho & Bun emphasises the offering of authentic Vietnamese street food at a reasonable price and in a setting that will make you feel as if you’ve stepped foot in Vietnam’

My friend, Cat, and I arrived on a Tuesday evening after work and were shown to our table. The restaurant was very busy and so we were very happy to see the reserved sign on the table in the corner waiting for us, but we quickly learnt that there was more seating downstairs. Many people that came in requested a downstairs table but I didn’t actually go down there so I have no idea what I was missing out on, at least I know for next time. The staff were very attentive and friendly and asked if we’d like some water and wine just a few minutes after us sitting down. We both very happily opted for a glass of crisp white wine which was actually very nice. 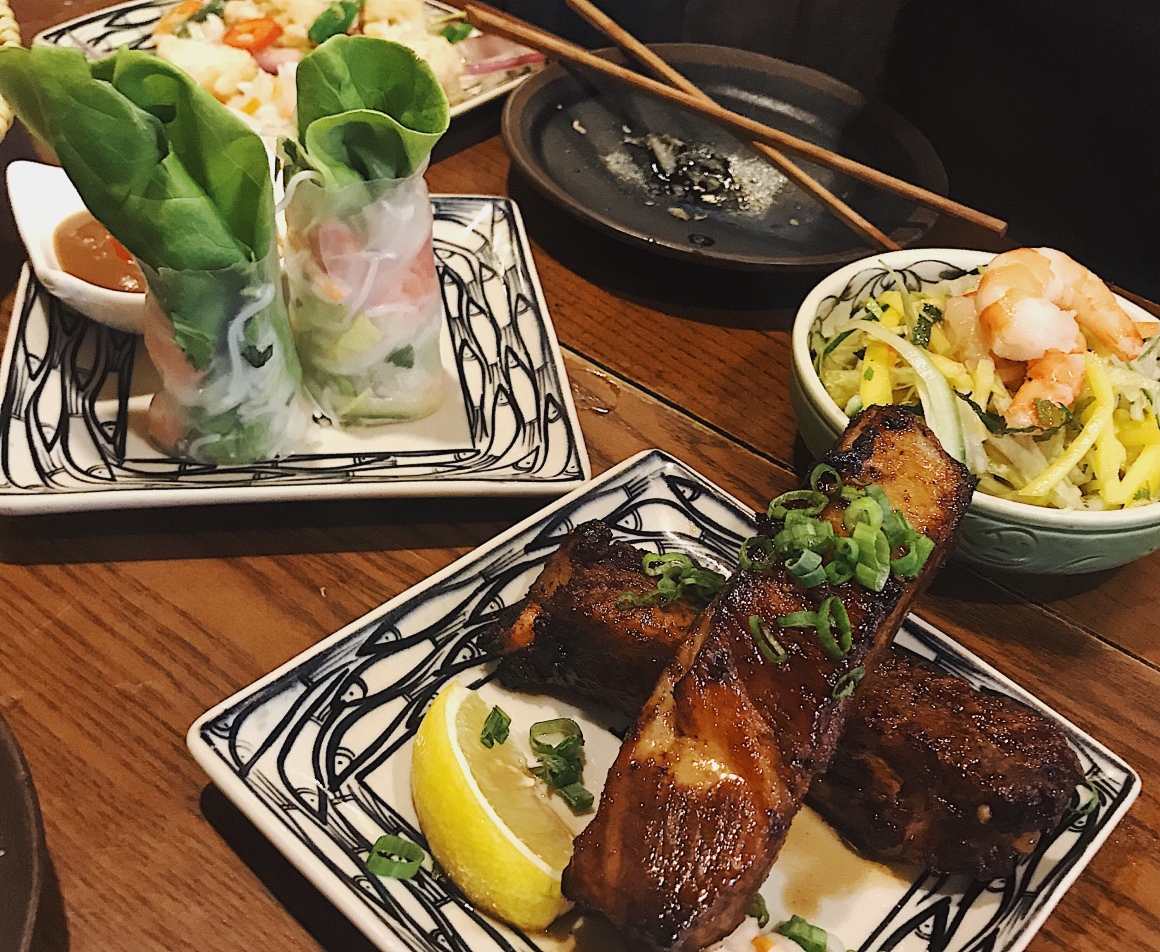 The Pho & Bun Tasting menu requires you to pick 3 starters each, one main and one desert. (it’s as much food as it sounds, yes.) And so we took our sweet time picking what appealed to our tastes the most, it was far more difficult than I first thought as I couldn’t decide on just 3 for a little while. But in the end this the list of starters and what we went for:


The pork and crab spring roll was the first to make it onto the table (they weren’t all brought out together but there wasn’t overly long in between and it was probably a good thing as if we had been sitting on a table for 2 rather than 4, we would probably had nowhere near enough space for all of these goodies at one time). It was still very hot when we had our first bite but that didn’t stop me from loving every second of it. Such a big and crispy roll with so much flavour, and they didn’t scrimp on the filling whatsoever. Top marks on the spring roll front from me!

The fresh summer roll with tiger prawn was next, I wasn’t sure what to expect from this as i’ve never tried one, and was a little shocked that it was cold but this all made sense as there was quite a lot of salad in it. It wasn’t the most exciting part of the meal for me and I now regret choosing it over the chicken wings but it was nowhere near unpleasant, just lacked a little bit of the flavour i was craving, HOWEVER, the satay sauce that it was served with was incredible, accompanied by some crushed peanuts. I’m not usually a huge fan of peanuts but this just blew my mind and worked so well with the roll.

The Ribs were a complete crowdpleaser for me. They were so tender and easy to eat (albeit a little bit messy, but that’s probably just down to my horrendous technique). The honey flavour was amazing and sticky, yet the meat fell straight off of the bone and into the dark abyss that is my mouth as soon as I attempted to eat it. If you’re going to Pho & Bun and you love a bit of meat then this is the starter for you.

Cat seemed more than content with her choice of starters. She seemed to be having the time of her life eating the Squid and just kept explaining to me how it was so so good. I think she was a little sad when it was all over! We bonded over the spring rolls as we were in agreement for once, but how could you not be when they tasted that go. Although I think she had food envy over my spare ribs as she could see how good they looked, i’m sure any nice person would have offered to share – but that’s not me. And so I let her get on with eating her prawn salad alone.

I was so unsure of whether to go with some form of noodles or opt for the Bao Burger, in the end the Bao won (it quite often does). I went for the Beef version, quite a bold move from me as I rarely choose a beef dish (unless it’s a roast dinner with all the trimmings or a steak). The ’28 days dry aged’ part of the dish threw me a little I think as I expected it to be more like a juicy steak or a shredded beef version of a burger. When it arrived I was a little disappointed that it was a burger, if I have an actual burger then I usually opt for a chicken version, so I was kicking myself that I didn’t choose the Pork Belly Bao as this is probably a safer option for me. The burger itself was nice, I loved the freshly steamed bun, these are made in-house every day and the sauce that it came with – the signature smoky mayonnaise sauce. Another nice touch was that it came topped with the Vietnamese flag, this made it all look a bit more special and pointed back to the roots of the restaurant. I nearly ordered some fries to go with my burger but I’m so glad I didn’t in the end. I was so full by the end of this meal that they may have needed a crane to lift me out if I had given in to temptation.
I was a bit jealous of Cat’s main. I’ve been craving curry for a while and this looked and smelt sensational. I was a little worried that it would’ve been too spicy for me, but I had a taste of hers and was very pleasantly surprised. When I return, maybe i’ll be giving this a go. There was a lot of the curry and she didn’t manage to eat all of this but she really wanted to and gave it a very good go!
We’d made it through the first 4 rounds, and it was time for the finale. The creme de la creme. The Pudding. There were a couple that took my fancy:
Homemade Soft Yogurt Ice Cream
Coconut Snow with Vietnamese Ice Coffee (Cat Chose this)
Pandan & Coconut Panna Cotta (This was the extra one we were given)
Vietnamese Flan Caramel (I chose this)

There was a little bit of a mix up when we ordered these as I ordered the Vietnamese Flan Caramel but somewhere along the line it got a bit muddled and I ended up with the Pandan & Coconut Panna Cotta, he was very apologetic and even showed me that he’d written down the right pudding and must have had panna cotta on the brain. That wasn’t a problem though as he let us have the Panna Cotta whilst they whipped up another flan in no time at all. This meant we got to try an extra one! although, saying that I didnt really like it. I’m not a fan of pistachio which this was a little bit like. Cat loved it though, as she did her Coconut snow and iced coffee. Cat is coffee queen and so anything with it in will be perfect for her. She was in her happy place.
Thank you so much to Pho & Bun for having us! We thoroughly enjoyed our meal and I’ll definitely return sometime soon. Those ribs are still calling my name!
To find out more about Pho & Bun you can have a look on their Website, Twitter, Instagram or Facebook

Our meal was complimentary in exchange for an honest review.

I’m Beth and I’ll be your blogger tour guide through all things social. I’ll be detailing my experiences of the good, the bad and the ugly.

On the menu you will find various events, such as premieres, immersive entertainment, food, music, the occasional holiday & a lot of alcohol…

So, hold on tight, we’re going on an adventure.

Happy Monday Kids. I haven’t got much to report

This rain is seriously messing up my plan to exit

Before the dreaded 3 day hangover. #stilldying ▫

Life before lockdown. Before this whole pandemic s

Any cookies that may not be particularly necessary for the website to function and is used specifically to collect user personal data via analytics, ads, other embedded contents are termed as non-necessary cookies. It is mandatory to procure user consent prior to running these cookies on your website.